New images from NASA have captured the beautiful golden reflection of the sun on the polar sea of Saturn’s largest moon, Titan. It is the latest image from a collaborative four year mission studying the Saturnine system.

Flying by Titan in August, NASA’s Cassini spacecraft snapped the photo, which shows sunlight reflecting off Titan’s swirling surface. In the past, the spacecraft has captured separate images of the polar seas and the sun shining against them, but this is the first time both have been see together in one view, the agency stated.

The mirror-like reflection, known as the specular point, is in the south of Titan’s largest sea, Kraken Mare – just north of an island archipelago separating two separate parts of the sea. To the human eye, this would appear as a haze but through Cassini’s Visual and Infrared Mapping Spectrometer (VIMS), “real color information” is provided in wavelengths that correspond to atmospheric windows, making the moon’s surface visible.

“The highest resolution data from this flyby — the area seen immediately to the right of the sunlight — cover the labyrinth of channels that connect Kraken Mare to another large sea, Ligeia Mare. Ligeia Mare itself is partially covered in its northern reaches by a bright, arrow-shaped complex of clouds. The clouds are made of liquid methane droplets, and could be actively refilling the lakes with rainfall,” stated NASA. 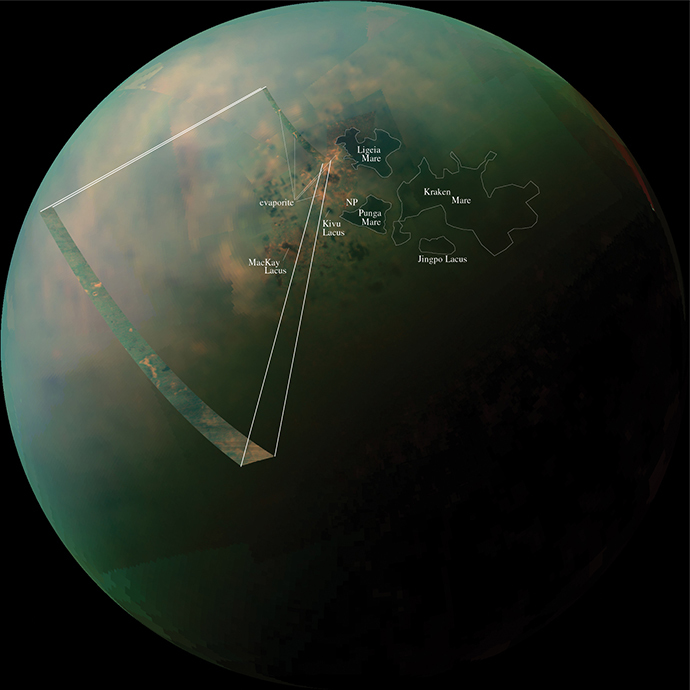 Titan is the only other body in the solar system known to have a liquid surface like Earth. Instead of water, the lakes and seas are made up of hydrocarbons, organic compounds that also rain down from the clouds that cover the moon. For this reason, scientists think that because Earth and Titan share so much in atmospheric composition, the Saturn’s moon might hold clues as to how the primitive Earth evolved into a life-bearing planet.

NASA said the latest image from Titan reveals that the sun’s glint appears much higher than it has in previous collections of data.

“The southern portion of Kraken Mare … displays a ‘bathtub ring’ — a bright margin of evaporate deposits — which indicates that the sea was larger at some point in the past and has become smaller due to evaporation,” NASA stated. “The deposits are material left behind after the methane and ethane liquid evaporates, somewhat akin to the saline crust on a salt flat.”

The Cassini spacecraft – a joint endeavor by NASA, the European Space Agency and the Italian space agency Agenzia Spaziale Italiana – was initially launched into space in 1997. It has been studying the Saturn system for about 10 years. Cassini is expected to continue gathering data until at least 2017, at which point it will make an intentional death-dive into the planet’s atmosphere to end its mission.